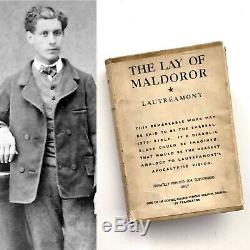 Meteor of a madman whose brief, intense flash inspired a significant art movement. Comte de Lautréamont[Isidore Lucien Ducasse]. First edition in English of Les Chants de Maldoror. One of 100 hand-numbered copies signed by the translator and founder of the notorious Cassanova Society, John Rodker. Covers bowed as usual, top half of the front board moderately stained, else Very Good.

Printed on handmade paper, uncut and containing three tissue-guarded plates after the French symbolist artist, Odilon Redon. Excitingly, in the rare dust jacket thats unrepaired and integral - adjectives scarcely applicable to the few surviving ones as they most often look like theyve endured a tortuous journey through Ducasses imagined hellscapes.

Slightly nicked and dusty, spine a shade darker and creased, else Very Good. Although he died as a relatively unknown writer, his works resurfaced and became a crucial inspiration for the burgeoning surrealist movement in the early twentieth century.

It was while reading Les Chants de Maldoror that French surrealist André Breton discovered the singular phrase that became foundational to the surrealist doctrine of objective chance: as beautiful as the chance encounter of a sewing machine and an umbrella on an operating table. This metaphor captures one of the most important principles of surrealist aesthetic: the enforced juxtaposition of two completely alien realities that challenges an observer's preconditioned perception of reality. German surrealist Max Ernst would also refer to Lautréamont's sewing machine and umbrella to define the structure of the surrealist painting as a linking of two realities that by all appearances have nothing to link them, in a setting that by all appearances does not fit them. Lautréamonts prose poem is comprised of six cantos that recount the epic of the anti-hero Maldoror who seeks to combat the forces of God and humanity.

The work is full of sadistic, cynical passages that work in conjunction with ironic references to classical authors such as Homer, Dante, and Shakespeare. Surrealists identified themselves with Lautréamonts use of black humor and celebrated the ways in which he defied convention, ridiculed values and standards, and challenged the construct of absolute reason.

For even better pricing, visit us at. The item "The Lay of Maldoror, Lautréamont, Ducasse, Poetry, Rare, Art, Surrealism, French" is in sale since Saturday, May 23, 2020.

This item is in the category "Books\Antiquarian & Collectible".ox1ve" and is located in Pasadena, California. This item can be shipped worldwide.