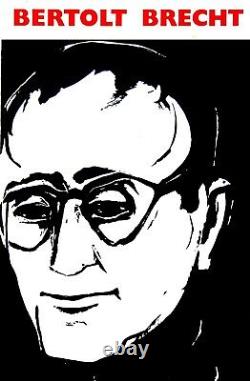 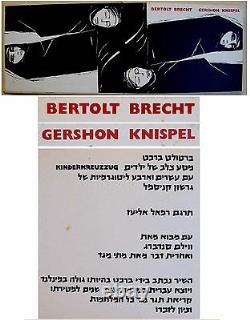 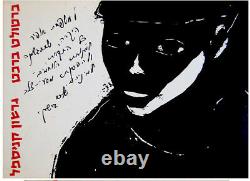 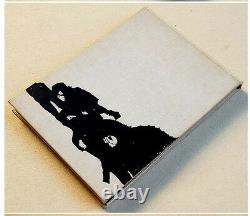 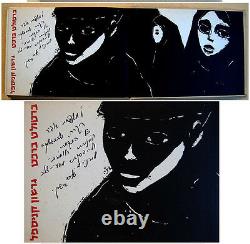 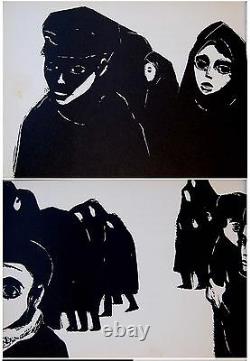 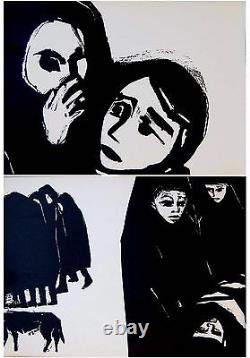 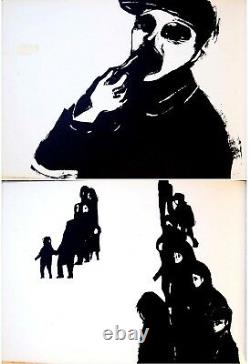 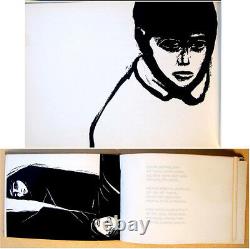 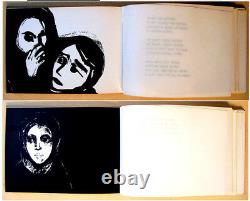 DESCRIPTION : This thrilling HOLOCAUST related Jewish JUDAICA ART PIECE was created 10 years after BERTOLD BRECHT has DIED and was dedicated to his memory. The Jewish - Israeli HOLOCAUST SURVIVOR Jewish artist of German origin GERSHON KNISPEL of the BEZALEL SCHOOL of ART in JERUSALEM prepared TWENTY FOUR very impressive DRAMATIC stone LITHOGRAPHS to accompany the BERTOLD BRECHT Holocaust related poem "'der Kinderkreuzzug " (The CHILDREN'S CRUSADE) which told the story of JEWISH CHILDREN REFUGEES who, At the beginning of the war, In 1939 escaped the NAZI HORRORS. BRECHT wrote this poem in 1941 in FINLAND where he himself was a refugee , Escaping from the NAZI invadors. The poem was composed by Brecht while he was in exile in Finland and is published in Hebrew on the tenth anniversary of his death, in opposition to all wars and in his memory. This edition was published in 1967 in Israel. The ARTIST has SIGNED and INSCRIBED this copy. In his beautifuly written inscription , The artist KNISPEL prays and wished to " The END of all CRUSADES ".

10 February 1898 14 August 1956 was a German poet, playwright, theatre director, and Marxist. A theatre practitioner of the 20th century, Brecht made contributions to dramaturgy and theatrical production, the latter through the tours undertaken by the Berliner Ensemble the post-war theatre company operated by Brecht and his wife, long-time collaborator and actress Helene Weigel. Bertolt Brecht was born on February 10, 1898, in the medieval city of Augsburg, part of the Bavarian section of the German Empire. Married in 1897, his father was a Catholic and his mother a Protestant. Brecht was their first child, baptized as Eugen Bertolt Friedrich Brecht.

His father, Bertolt Friedrich Brecht, worked in a paper factory. His mother, Wilhelmine Friederike Sophie Brezing, was ill with breast cancer most of his young life. He had one brother, Walter, who was born in 1900.

Brecht was a sickly child, having a congenital heart condition and a facial tic. As a result, he was sent to a sanitarium to relax.

At age six he attended a Protestant elementary school (Volksschule) and at age ten a private school, The Royal Bavarian Realgymnasium (Koeniglich-Bayerisches Realgymnasium). Like most students, he was educated in Latin and the humanities, later being exposed to Nietzsche and other thinkers. He suffered a heart attack at the age of twelve but soon recovered and continued his education. Significantly, Brecht was exposed at a young age to Luther's German translation of the Bible, a text considered instrumental in the development of the modern German language. Quotes from and references to the Bible abound throughout Brecht's work and can be found most particularly in Mother Courage and Her Children in the mouth of the chaplain.

While in school he began writing, and he ended up co-founding and co-editing a school magazine called The Harvest. By age sixteen, he was writing for a local newspaper and had written his first play, The Bible, about a girl who must choose between living and dying but saving many others. He was later almost expelled at age eighteen for dissenting about it being necessary to defend his country in time of war. By this time, his mother was heavily drugged with morphine because of her progressing cancer. He started to write Baal at this time, a play concerned with suffering caused by excessive sexual pleasures.

It sensationally depicted what were considered immoral attitudes at the time. Brecht's own sex life is fascinating in many ways. He is thought to have had no fewer than three mistresses at any time throughout his adult life.

When he was a child, the family's second servant, Marie Miller, would hide objects in her undergarments for Brecht and his brother to find. Through Brecht's poetry, we understand that his mother used to smell his clothes to determine the extent of his sexual activities.

By the age of sixteen, he began to frequent a brothel as part of a conscientious effort to broaden his experiences. Between sixteen and twenty, he apparently pursued eight girls simultaneously, including Paula Banholzer, the woman who gave birth to his illegitimate child in 1919. He is known to have experimented with homosexuality, often inviting literary and musically inclined male friends to his room on weekends in order for them to read erotic compositions. His diaries, although vague, mention his need for both males and females to fulfill his sexual desires. Brecht's desire for experience was, throughout his life, all-consuming. In 1921, he took his second trip to Berlin and attended the rehearsals of Max Reinhardt and other major directors. In 1922, his play Drums in the Night opened in Munich at the Kammerspiele and later at the Deutsches Theater in Berlin. He received the prestigious Kleist prize for young dramatists as a result. Brecht also entered into his first committed relationship, his marriage with the opera singer Marianne Zoff, at the age of twenty-four.

Their daughter Hanne was born the following year. Despite being married, Brecht had extramarital affairs and spent very little time with his wife or daughter. In 1923, his two plays Jungle of Cities and Baal were performed.

After moving to Berlin in 1924, he met a communist Viennese actress, Helene Weigel. His wife Marianne moved in with her parents after the birth of Hanne, and soon she stopped responding to Brecht's letters.

At age twenty-six Brecht fathered his second illegitimate child, with Weigel. Their son was named Stefan. Brecht divorced Marianne Zoff and in 1929 married Helene Weigel. At this point, he was just thirty-one. Helene Weigel gave birth to their second child, Barbara, in 1930. During this time, Brecht was by no means monogamous. He was obsessed with the idea of abandonment, and as a result, he abhorred ending relationships. The women in his life were important for his writing career, and modern feminist detractors often try to claim that his mistresses in fact wrote much of what was accredited to him.

The allegation is largely untrue, but women such as Elisabeth Hauptmann did write significant parts of The Threepenny Opera. In addition, other mistresses included Margarete Steffin, who helped him write The Good Woman of Setzuan and Mother Courage and Her Children ; Hella Wuolijoki, who allowed him to transform her comedy The Sawdust Princess into Herr Puntila and His Man Matti ; and Ruth Berlau, who bore him a short-lived, third illegitimate child in 1944. Weigel was tolerant of his affairs, and she even warned other men to stay away from his mistresses because it upset him when they made their moves. Brecht's writings show the profound influence of many varied sources during this time and the remaining years of his life.

He studied Chinese, Japanese, and Indian theatre, focused heavily on Shakespeare (adapting, among other plays, Shakespeare's Coriolanus) and other Elizabethans, and was fascinated by Greek tragedy. He found inspiration in other German playwrights, notably Buchner and Wedekind, and he enjoyed the Bavarian folk play. Mother Courage and Her Children arguably owes much to Schiller's Wallenstein trilogy. Brecht had a phenomenal ability to take elements from these seemingly incompatible sources, combine them, and convert them into his own works.

In 1933, Brecht took his family and fled to Zurich after the burning of the Reichstag, later moving around the world to escape Nazi rule. In October 1947, during the McCarthy years, Brecht was called to appear before the House Committee on Un-American Activities. Although not an official member of America's Communist party, Brecht left the United States for Switzerland the next day.

He soon reunited with Helene Weigel, and they traveled to East Berlin in 1948 and set up the Berliner Ensemble with full support from the Communist regime. Mother Courage and Her Children was the Berliner Ensemble's inaugural production. In 1950, Brecht and Weigel were granted Austrian citizenship. Brecht's four great plays were written between 1938 and 1945.

These included, for one, The Life of Galileo , which followed history slavishly. It dealt with the protagonist's self-hatred for giving up his convictions in the face of the Inquisition. The others were Mother Courage and Her Children ; The Good Woman of Setzuan , which in some ways follows from Mother Courage in examining the compatibility of virtue and a capitalist world; and The Caucasian Chalk Circle , which introduces questions about power and who is entitled to own things.

After this period, Brecht worked on his famous adaptation of Antigone and spent much of his energy recording his theoretical ideas. Brecht experimented with Dadaism and expressionism in his early plays, but he soon developed a unique style that suited his own vision. He detested "Aristotelian" drama and the manner in which it (at least from his point of view) made the audience identify with the hero without enough analysis of the hero's flaws. To him, when such drama produced feelings of terror and pity and led to an emotional catharsis, the process prevented audience members from thinking.

It is the ancient quarrel between philosophers and poets once again, with another thinker trying to reform poetry. Determined to destroy what he considered theatrical illusions, Brecht made his dreams into realities when he took over the Berliner Ensemble. In one of his early productions, he famously put up signs which said, Glotzt nicht so romantisch! Don't stare so romantically! For further information, see About Epic Theatre in the ClassicNote on Mother Courage and Her Children.

Brecht received the National Prize, first class, in 1951. In 1954, he won the international Lenin Peace Prize. Brecht died of a heart attack on August 14, 1956, while working on a response to Samuel Beckett's absurdist play Waiting for Godot , written the year before. Even at the end, Brecht was very much interested in the modern drama of the day. He provided instructions that a stiletto be placed in his heart and that he be buried in a steel coffin so that his corpse would not be riddled with worms.

He also left a will giving the proceeds of his various works to particular mistresses, including Elisabeth Hauptmann and Ruth Berlau. Unfortunately, the will lacked the necessary witness signatures and was therefore considered void.

Brecht is buried in the Dorotheenfriedhof in Berlin. The item "SIGNED Lithograph BRECHT Poem HOLOCAUST Art BOOK Judaica JEWISH Israel HEBREW" is in sale since Friday, October 2, 2020. This item is in the category "Collectibles\Religion & Spirituality\Judaism\Books". The seller is "judaica-bookstore" and is located in TEL AVIV. This item can be shipped worldwide.