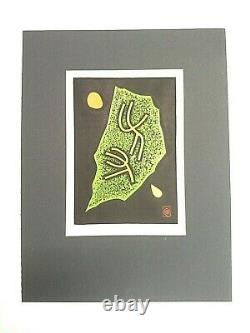 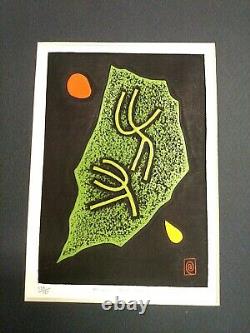 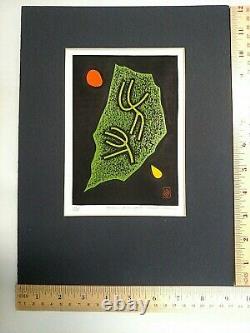 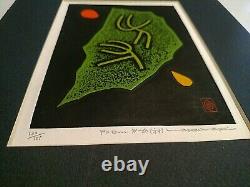 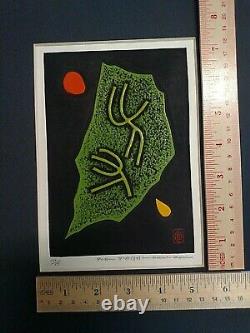 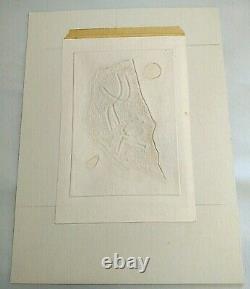 This ad is for a Haku Maki (1924 2000) pencil signed limited edition & numbered. Print #130/151 titled Poem 71-60. Haku Maki was a Japanese artist of the second half of the 20th century. Haku Maki was born in Aso-machi in Ibaraki Prefecture in 1924, as Maejima Tadaaki. In the late 1950s, he selected the name Haku Maki to show his humility and self-styled confusion.

If translated literally, "Maki" is Roll, "Haku" is White. He first made his name and his living by producing prints featuring Chinese characters (kanji). His life as an artist dates from the mid-1950s, when the earliest known Maki prints began appearing.

Maki produced about 2000 different images. This makes him one of the most prolific Japanese print makers of his day. Yet he did not keep a running list of the prints as he made them. Moreover, there is no catalogue raisonné of his work. Artist: Haku Maki (1924 - 2000). Signature: Signed in Pencil Lower Right Haku Maki. Size Overall w/ Matte: about 9 x 12. Image Area: about 5 x 8. Condition: Print is matted for framing and looks to be in very good condition. Print is signed by the artist Haku Maki - numbered 130/151 and titled Poem 71-60 in the lower margin. Print has the Haku Maki red imprint in print right left. This print is a good example of his unique printing technique, using cement to give a strong embossed texture. Print has a matte black background with an orange. Spot, green stick figure imagery and a yellow abstract drop shape in the image. This and his use of Chinese characters, or kanji as a central motif are what he first became known for.

This is a great Haku Maki print. Please look through our store for other similar pieces and other great finds! The item "Scarce Haku Maki Cement Relief Print Limited Edition#130/151 TitledPoem 71-60" is in sale since Saturday, April 13, 2019. This item is in the category "Art\Art Prints".

The seller is "djdshop59" and is located in Geneva, New York. This item can be shipped worldwide.