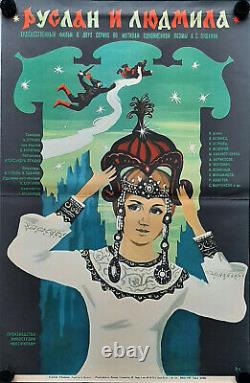 " Ruslan and Lyudmila " is a Soviet two-part film directed by highly famous Soviet director Alexander Ptushko , filmed in 1971 at the Mosfilm studio based on the poem of the same name by Alexander Pushkin. This is the last film by Alexander Ptushko - according to film critics, the pinnacle of the director's creativity. 1st series In the palace of the Kiev prince Vladimir there is a feast - the beloved daughter of the prince, Lyudmila, marries the hero Ruslan, who saved Kiev from the Pechenegs. Everyone is happy about the holiday, except for three rivals of Ruslan - Rogdai, Farlaf and Ratmir. After the feast, Ruslan and Lyudmila are left alone in their room, but suddenly the window is thrown open and Lyudmila is kidnapped by an unknown force. Heartbroken Ruslan informs Vladimir and his guests about it. The enraged prince accuses the groom of the fact that he could not save his daughter, after which he announces that he will give Lyudmila as a wife to the one who will find and take her back to the palace. In addition to Ruslan, the princess is immediately volunteered to look for his rivals. On the way, the title character meets the old hermit Finn. He knows that Lyudmila was kidnapped by the evil sorcerer Chernomor, and tells the knight about the intrigues of the villain-magician. He also knows to Ruslana how in his youth he tried in vain to win the love of the young beauty Naina, who remained indifferent to him. Then he began to study witchcraft in order to bewitch his beloved.

The love spell worked, and Naina was inflamed with passion, but by that time 40 years had passed since their last meeting. Naina became a repulsive old witch woman, and now Finn rejected her. Since then, enmity began between them.

Then Ruslan faces Rogdai, they are fighting for life and death. The battle ends in Rogday's defeat - Ruslan throws him into the Dnieper. All this time, Lyudmila has been living in captivity in the palace of Chernomor. She is surrounded by wealth and cold beauty, but nothing pleases the girl, she with all her soul longs to escape from captivity. Chernomor is trying to achieve the location of the captive. Once Lyudmila accidentally takes possession of his invisible hat, with the help of which she can hide from him and from his servants. This somewhat brightens up her bleak, dreary days. On the battlefield, Ruslan sees a huge head, which tells him its story.

Once the head was a giant knight, the elder brother of Chernomor. There was no harmony between them, and one night Chernomor cut off his head in a dream and made him guard a magic sword. The head of the hero gives this sword to Ruslan and admonishes him to revenge and victory over Chernomor. 2nd series Ruslan drives farther, but on the way, the intrigues of Naina and Chernomor await him: these two are trying to lead him astray, with their efforts on the way, mortally dangerous encounters with a tiger and evil spirits await him. Naina even turns into Lyudmila's double.

Chernomor uses cunning and takes the form of a seriously wounded Ruslan. Ludmila unknowingly falls into his net, the sorcerer puts her to sleep and puts an invisibility hat on her so that no one finds her. Ruslan nevertheless gets to the palace, enters into a fight with Chernomor and cuts off the sorcerer's long beard - the source of his magical power.

Chernomor loses all witchcraft abilities. Ruslan finds sleeping Lyudmila and tries to wake her up, but to no avail. Having failed to get from Chernomor how to bring her back to life, Ruslan ties him up and goes back - with him and with his bride. On the way, Ruslan meets Ratmir, his former rival, who has now become a fisherman and happily lives with his new chosen one. Naina finds Farlaf, who all this time was not looking for Lyudmila, but was idly spending time in his village.

The sorceress convinces Farlaf to kill Ruslan, after which he will have the opportunity to be known as a hero and marry Lyudmila. Cowardly by nature, Farlaf agrees and kills Ruslan the same night. Taking Lyudmila, he goes to the prince's palace.

Vladimir is very glad to see his daughter, but her mysterious deep sleep causes grief in his father. Farlaf, not knowing how to explain the girl's strange condition, starts describing the princess's imaginary searches and the feats allegedly committed for this purpose. Finn finds Ruslan's lifeless body. He sprinkles the knight first with dead, and then with living water, and he comes to life.

Not finding Lyudmila next to him, he hurries to Kiev, having finally received a magic ring from Finn, which will help wake Lyudmila. Meanwhile, the Pechenegs are attacking Kiev again. Ruslan, who arrived in the capital city, joins the battle with other Kiev knights. After winning the battle, they return to the palace as heroes. With the help of a magic ring, Ruslan, to the surprise of Prince Vladimir and to the horror of Farlaf, awakens Lyudmila.

It is clear to everyone that Farlaf is a fraud, and he is expelled in disgrace. The prince gladly again gives his daughter to Ruslana as a wife.

Studied at the New Reality studio of E. In 1954 she graduated from the art department of the Moscow Polygraphic Institute.

Participant of the Tagansky exhibition in 1962. Original title on the poster. Mention details and specifications that you believe are relevant to your buyers.

CHANTSEV ALEXANDER VASILIEVCIH (1949 - 2002). Alexander Chantsev was born in 1949 in the city of Torun, Poland. In 1973 he graduated from the Moscow Higher School of Industrial Art (formerly the Stroganov School) with a degree in Artistic Ceramics. The second prize of the International Olympic Poster Competition in 1980 gave impetus to the work in the poster genre. Several years of fruitful work in the circus poster followed, and during this period the individual style and technique of Alexander Chantsev gradually developed. In 1989 he was admitted to the Union of Artists. The film posters brought the artist international fame. Solo exhibitions of film posters by Alexander Chantsev took place in Rome in 1991 (together with Yuri Boxer) as part of the exhibition of Soviet film posters, which was held in the largest exhibition hall of the city - Palazzo delle Esposizioni. In 2001, an exhibition of movie posters by Chantsev, Boxer and Maistrovsky was held in the city of Tavira (Portugal). Alexander Chantsev took part in the largest exhibitions of Soviet and Russian posters, regularly participated in international biennials in Warsaw, Lahti, Colorado, Brno, took part in a poster exhibition in the Louvre (1989), the International Poster Festival in Chaumont, France (1991), in the exhibitions Russian social poster "in the USA (1991-92), " Perestroika.

Glasnost in Japan (1991-92), was awarded with diplomas of various competitions, a diploma of the finalist of the European competition of advertising EPICA in Paris (1992). Exhibitions of posters, in which Alexander Chantsev participated, have traveled almost all over the world, the originals and prints have ended up in the most famous galleries and in private collections in the USA, France, Switzerland, Belgium, and the Czech Republic. However, the rise of poster art, which took place thanks to perestroika and the resulting freedom, gradually ended, and interest in the poster was largely lost.

New times have come when the emerging market relations have made completely different demands on artists. I had to master new genres - advertising booklets, annual reports, logos, corporate styles - and face a different customer. For the last seven years of his life, Alexander Chantsev was engaged in the design of exhibition stands, working as the art director of the Expoline company. It was a new business, and gradually the festive atmosphere of the exhibitions captured Alexander Chantsev entirely. Possessing tremendous efficiency and real professionalism, he managed to create many interesting exhibition stands for such companies as Lucent Technologies, Avaya, Alcatel, A&T Trade, KRKA, Shreya, Orimi Trade, Sunway, Mobile TeleSystems.

Nevertheless, in Russia and the world, Alexander Chantsev is known primarily as a brilliant poster artist who belonged to a remarkable generation of artists. And the soft, good-natured humor of his circus posters, the philosophical metaphors of the movie posters, the sharp, satirical images of political posters will forever remain in our memory. YALTA HOTEL YALTA INTOURIST WELCOMES YOU! Come to us in the USSR!

- the meaning of the posters issued by the firm "Intourist" was advertising of tourist trips for foreign citizens beyond the "Iron Curtain". Yalta Hotel - is still working nowadays under the same name. In: 16x26 - cm: 40x60. The item "RUSLAN AND LYUDMILA SOVIET USSR FANTASY MOVIE POSTER by PTUSHKO & PUSHKIN POEM" is in sale since Wednesday, November 10, 2021. This item is in the category "Art\Art Posters".

posters" and is located in KIEV. This item can be shipped worldwide.