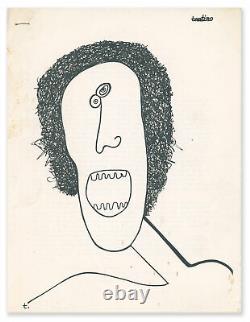 His death sentence was later commuted when the death penalty was abolished and Trantino ended up in Rahway State Prison until his eventual parole in 2001. He began to write stream-of-consciousness poetry and prose and to create drawings influenced by Picasso and Ben Shahn. Knopf published Trantino's autobiography titled Lock the Lock. Henry Miller praised Trantino's book when it was released saying, This marvelous book of the century could just as well have been taken for a lump of shit, horse shit what I mean.

And it is a huge, a gargantuan piece of shit coming straight from a genius, from his mouth and from his ass-hole. Miller later published An Open Letter to Stroker!

Inspired By the Writings and Art Work of Tommy Trantino, A Prisoner in Trenton State Prison, New Jersey (1978). This packet appears to have been published by supporters calling for Trantino's release. In an impassioned introduction, they paint Trantino as a poor, white, anti-system victim, unjustly imprisoned because [he] will not accept the illegitimate authority of Amerika. This is followed by half a dozen poems and four drawings. A scarce outsider artist publication preceding the author/artist's 1973 New York Times profile. Corner-stapled 8 ½" x 11" sheets, 8 leaves mimeographed from typescript on rectos only. Some foxing and other stains, vertical crease from folding. Not found by us in OCLC. Subject: Art Movements & Artists, Crime & Punishment, Poetry. Purveyor of radical, fringe & extremist material operating from Cornish, NH. We are not propagandists and do not necessarily endorse the views of any of the material we carry. We believe in freedom of speech and have a scholarly interest in the entire historical record. We guarantee the condition of every book as it's described. This listing was created by Bibliopolis. This item is in the category "Books & Magazines\Antiquarian & Collectible". The seller is "davidanthembookseller" and is located in this country: US. This item can be shipped worldwide.