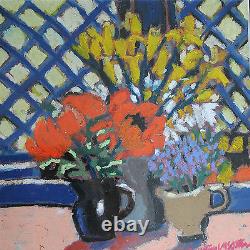 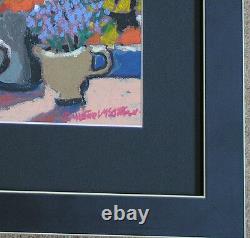 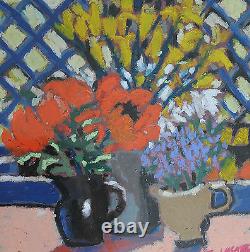 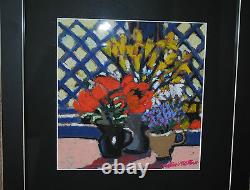 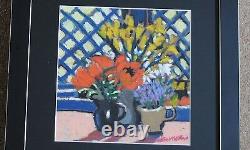 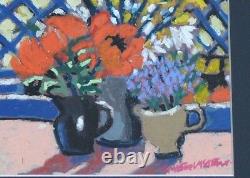 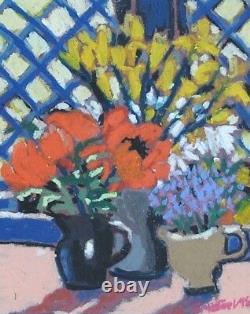 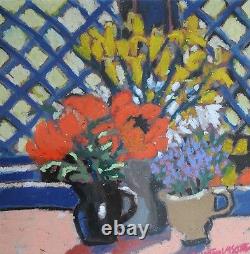 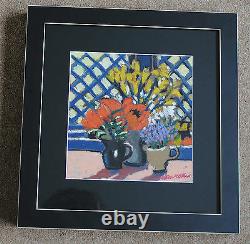 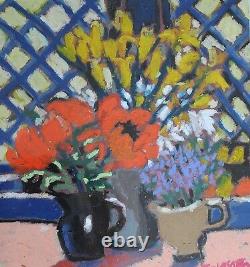 CHRISTINE MCARTHUR RSW RGI (1953). 40 x 40 cm framed. A handwritten Birthday poem is attached to the back and signed again.

Christine McArthur was born in Kirkintilloch, near Glasgow in 1953 and studied at Glasgow School of Art between 1971 and 1976. After graduating she taught and produced book illustrations until the demand for her work enabled her to paint full time. Her early work was primarily in oil and she became well known for her large scale still life paintings on canvas. In the late 1980s she began to work in oil pastel and watercolour but more recently she has reverted to oil, as well as acrylic and collage.

Christine McArthur was awarded the Scottish Education Department travelling scholarships in 1975 and 1976 and was elected a member of the Royal Glasgow Institute of the Fine Arts in 1990. In 1995 she was elected a member of the Royal Scottish Society of Painters in Watercolour. In 1997 John Lewis commissioned four large murals each 6ft x 15ft - for the Glasgow store in 1999. In 2002 she received a commission from John Lewis for murals for the extension to their Peter Jones store, Sloane Square, London. In 2009 she resigned from the RGI and the RSW.

The item "ORIGINAL CHRISTINE MCARTHUR PAINTING, SCOTTISH, HANDWRITTEN POEM VERSO" is in sale since Wednesday, October 14, 2020. This item is in the category "Art\Paintings".