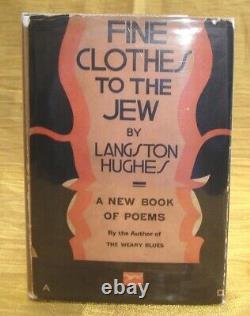 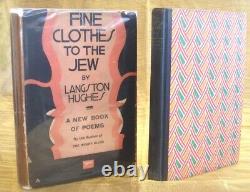 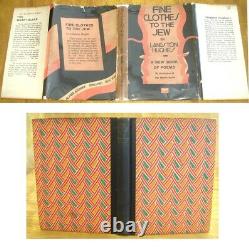 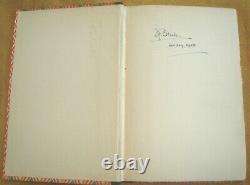 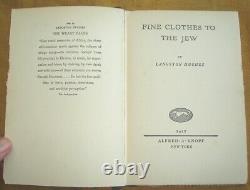 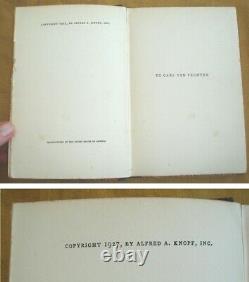 FINE CLOTHES TO THE JEW. Published by : ALFRED A KNOPF.

First Edition & First Printing. James Mercer Langston Hughes (February 1, 1901 - May 22, 1967) was an American poet, social activist, novelist, playwright, and columnist from Joplin, Missouri. One of the earliest innovators of the literary art form called jazz poetry, Hughes is best known as a leader of the Harlem Renaissance. He famously wrote about the period that "the Negro was in vogue", which was later paraphrased as when Harlem was in vogue. Growing up in a series of Midwestern towns, Hughes became a prolific writer at an early age.

He moved to New York City as a young man, where he made his career. He graduated from high school in Cleveland, Ohio, and soon began studies at Columbia University in New York City. Although he dropped out, he gained notice from New York publishers, first in The Crisis magazine, and then from book publishers and became known in the creative community in Harlem. He eventually graduated from Lincoln University. N addition to poetry, Hughes wrote plays, and short stories.

He also published several non-fiction works. From 1942 to 1962, as the civil rights movement was gaining traction, he wrote an in-depth weekly column in a leading black newspaper, The Chicago Defender. Fine Clothes to the Jew is a 1927 poetry collection published by Alfred A. Because it departed from sentimental depictions of African-American culture, the collection was widely criticized, especially in the Black press, when it was published.

The title appears in the poem "Hard Luck" in the book's first section. The original dustjacket houses this book. Few small chips to the extremities and spine. Small repair to the back of the spine but no other repairs. Now housed in a removable plastic archival sleeve.

Cloth spine with green lettering in a great condition. Paper covered decorative boards in a fairly good condition. Light bumping to the corners. Small inscription to the very first blank endpage which states. Browning and light foxing to the 89 pages.

Roughcut to the side and bottom edge. Top edge is cut straight and has a dark grey/blue colour.

These poems are hardcore and not politically correct. This item is in the category "Books, Comics & Magazines\Books". The seller is "modern_first_printings" and is located in this country: GB.