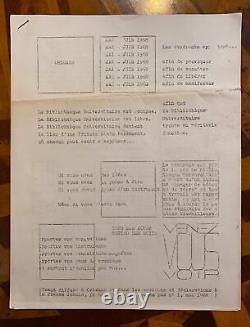 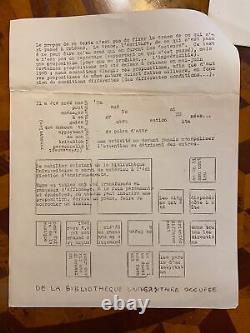 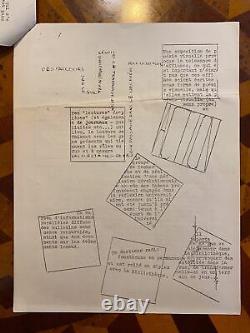 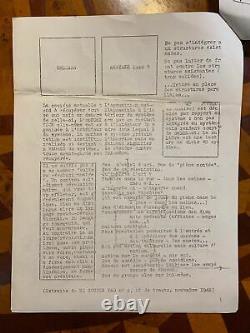 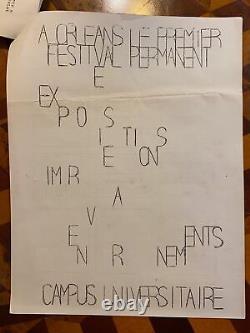 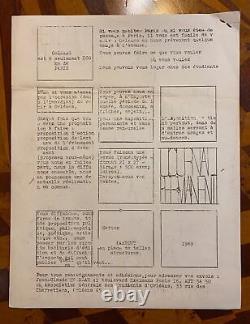 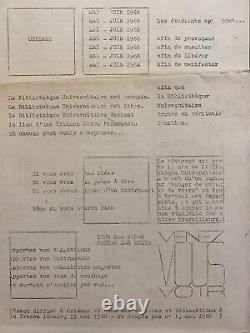 Description: 3 sheets (270 x 210 mm) printed "roneotype" i. Mimeographed on both sides to produce 6 pp. Some insignificant toning, a trifle soiled along folds. Suitable for exhibition and study.

"Meta-Art" / Concrete Poetry in the service of revolution, namely the May-June'68 student uprising that almost toppled the De Gaulle administration. Here offered is the 6-page mimeograph Manifesto for the Occupation of the University of Orleans Library, being an offprint from Moineua's own "Ne coupez-pas" journal, no. 1 (May 1968) et no. 2 (November 1968), of which only 4 issues were published.

"Ne coupez-pas" was devoted to political discussions, visual poetry and typographical and design experiments (we have been unable to locate a complete set). Whereas Moineau was a founding member of the "Meta-Art" avant-garde group, and was active alongside concrete artists and activists such as Henri Chopin, Moineau's graphic output was limited to only a few years late 60s. The events of May 1968 have entered into social and cultural legend.

While French students were leading the nation into a veritable revolution, new waves of revolt spread across Europe (in France and Italy particularly), Mexico, and Czechoslovakia (culminating in the Prague Spring uprising). But the Student Revolt in France remains iconic: its proliferation outward to other sectors of French society culminated in a vast general strike that paralyzed the government.

The Mai'68 posters, pamphlets, and leaflets brought bold and exciting elements to typographic and graphic design, as is attested by the present "lo-fi" mimeograph. In the words of the Parisian agit-prop Atelier Populaire, these rude and hastily fabricated materials are described as weapons in the service of the struggle and are an inseparable part of it. Their rightful place is in the centers of conflict, that is to say, in the streets and on the walls of the factories. To use them for decorative purposes, to display them in bourgeois places of culture or to consider them as objects of aesthetic interest is to impair both their function and their effect. This is why the Atelier Populaire has always refused to put them on sale.

Even to keep them as historical evidence of a certain stage in the struggle is a betrayal, for the struggle itself is of such primary importance that the position of an'outside' observer is a fiction which inevitably plays into the hands of the ruling class. That is why these works should not be taken as the final outcome of an experience, but as an inducement for finding, through contact with the masses, new levels of action, both on the cultural and the political plane. 1944 was a professor of mathematics Faculty of Science at the University of Orleans. Occasioned by the Mai'68 student revolts in Paris, he organized the occupation of the University of Orleans Library.

ORDER WITH CONFIDENCE: Michael Laird has over thirty years' experience working with rare books and manuscripts; he a proud member of the Antiquarian Booksellers Association of America (ABAA), and is a Certified member of the Appraisers Association of America (AAA). We look forward to working with you in developing your collection! This listing was created by Bibliopolis. This item is in the category "Books & Magazines\Antiquarian & Collectible". The seller is "nec-plus-ultra" and is located in this country: US.