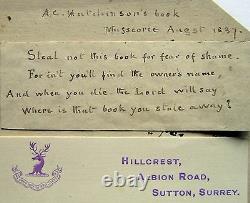 We specialise in fine arts, miniatures, water colours and oils. Billing Antiques is a subsidiary of Chantry Fine Art. According to The Asiatic Journal and Monthly Reporter Major A. Hutchinson joined the Bengal Artillery as a cadet in 1830, rising to Major in 1856. He was a keen amateur artist and filled an album with Indian sketches and all sorts of other views, figure studies and copies of well known works. Unfortunately, he did not discriminate between then, placing studies of goats next to drawings of pretty English women, or dashing indian soldiers. Worse, he drew on both sides of each page. The album was in very poor condition with much insect damage and not a few tears.

We have covered the wormholes and repaired tears as best we can. We have also managed to single out some individual drawings to mount separately, some to mount showing drawings on both sides and have left entire pages where nothing could be extracted. These have not been mounted and are photographed on both sides.

Nevertheless the collection is extremely interesting and very worthwhile collecting. Hutchinson signed his name on the first leaf, dating it 1837 and listing the place as Mussooree. He also wrote a small poem on the album cover which states. Steal not this book for fear of shame. For in't you'll find the owner's name.

And when you die the Lord will say. Where is that book you stole away. This item shows the opening page signature and date, the poem and a letter heading belonging, it is believed to his family in England, though it is much later than the original manuscript, dating circa 1920. We have put a ridiculous price on them to prevent their sale! Size 4" x 3" (10cm x 8cm).

We try to describe every item as accurately as possible. The item "INDIA RAJ THE POEM AND LETTER HEADING TO THE ALBUM MAJOR HUTCHINSON 1837" is in sale since Wednesday, April 27, 2016. This item is in the category "Art\Other Art". The seller is "billingantiques" and is located in Northampton.