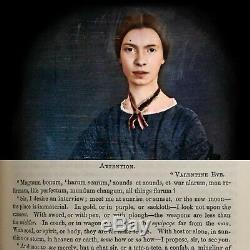 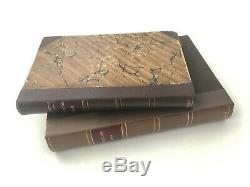 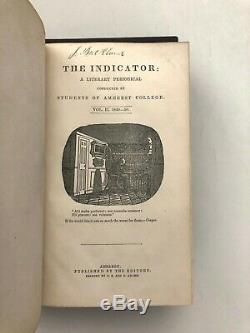 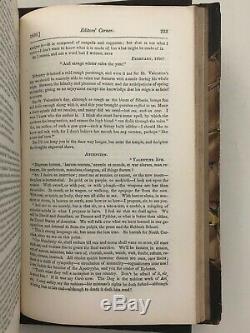 Her greatness in print for the first time. The Indicator: A Literary Periodical Conducted by the Students of Amherst College. Amherst, June 1849 - April 1850. Half-brown calf over contemporary marbled boards, red speckled edges, a well done rebacking, and some rubbing to extremities. Woodcut vignette to title page - minor toning and offsetting, a few stray spots otherwise remarkably crisp and clean.

Dickinson's first published work and one of the very few that appeared within her lifetime. A tour de force of a valentinepp. Sir, I desire an interview; meet me at sunrise, or sunset, or the new moon -the place is immaterial...

Published anonymously, it appeared in the February 1850 issue of Amherst College's student literary magazine, The Indicator. With a publication lifespan of only 3 years, and annual student enrollment of between 166 and 182, the circulation would surely have been quite small. This copy signed on the title page by James Buckland a classmate of Emilys brother, Austin. The valentine was likely intended for George Gould, an editor of the magazine.

Of modest background, relying on the Charity Fund to pay for school, the lanky 68 Gould was regarded as one of the most promising stars of Amherst. It was a witty send-up of classical learning, biblical rhetoric, current political oratory, and discourses on romantic friendship. The identity of the anonymous author was no secret, since Emily, giving herself away, mentions in the verse her dog, Carlo, the black Newfoundland her father gave her that winter. Edward, who believed that women should stay out of the public spotlight, could hardly have been pleased by his daughters flamboyant literary debut.

Emily Dickinson was writing, exuberantly experimenting with style and voiceshe was in a state of eruption, throwing off the rules her elders had pounded into her. There is no doubt that Emily and George enjoyed an intimate friendshiphe was the type of sensitive, idealistic young man with whom she could share her enthusiasm and, possibly, her poetry.

Goulds invitation to Emily to attend a candy-pulling with him has survived; the poet preserved it and 25 years later, drafted a poem(Fr 1389) about winters approach on the back. Beyond this, however, Goulds role in her life remains a matter of speculation. In a letter to Mabel Loomis Todd, dated February 8, 1894, Gould wrote, I had quite a cherished batch of Emilys letters myself kept sacredly in a small trunkwhich some fifteen years ago mysteriously disappeared Had they survived, they undoubtedly would have solved the riddle.

Satisfactory synonyms for the ubiquitous rare book descriptors scarce and significant elude me really, nothing feels sufficient for this piece. I simply suggest that you answer the clarion call of the book-collecting gods to become part of an amazing her story as the next caretaker of this gem. Ref: Critical Companion to Emily Dickinson: A Literary Reference to Her Life and Work, Sharon Leiter.

For even better pricing, visit us at. The item "Emily Dickinson, Poetry, First Appearance, Rare, Poems, History, Art, Literature" is in sale since Sunday, May 24, 2020. This item is in the category "Books\Antiquarian & Collectible".

ox1ve" and is located in Pasadena, California. This item can be shipped worldwide.