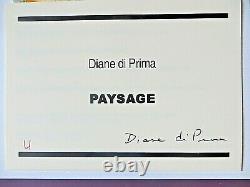 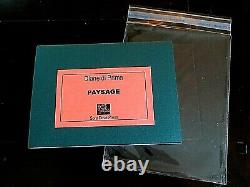 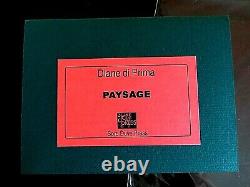 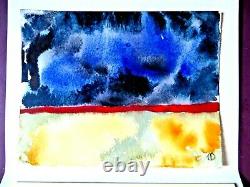 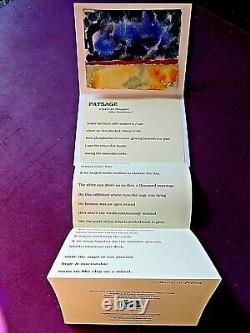 DIANE DI PRIMA - PAYSAGE. This broadside poem was published in 2007 by Sore Dove Press in an edition limited to 86 copies (stated) of which 26 were lettered and carried an original watercolor painting by di Prima. This copy is letter U.

It's a single sheet folded three times by the publisher to make four panels, pasted to a folder measuring 4 1/2 by 6 inches. This copy is one of the 26 lettered & signed copies with her original art.

This is the first and only time that Diane's poetry and original artwork were published together. Diane di Prima passed on October 25, 2020 in San Francisco. She was an original Beat writer and very possibly the only woman in the group at the time!

Later, she became a de facto leader of what became known as Women of the Beat Generation. She was a tough woman and a great poet whose work will stand the test of time.

HAND-SIGNED/HAND-PAINTED BY DIANE DI PRIMA. The condition is FINE/PRISTINE - GUARANTEED. The item "Diane di Prima SIGNED PAYSAGE 1/26 WITH HER ORIGINAL ART, BEAT GENERATION" is in sale since Friday, November 13, 2020. This item is in the category "Books\Antiquarian & Collectible". The seller is "cohenyislander" and is located in San Francisco, California.