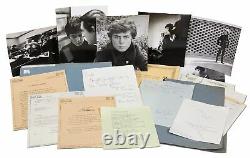 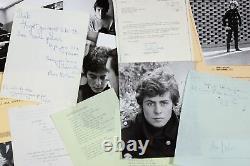 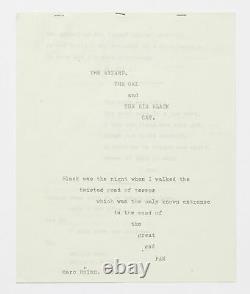 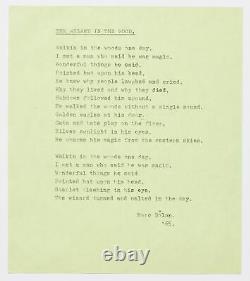 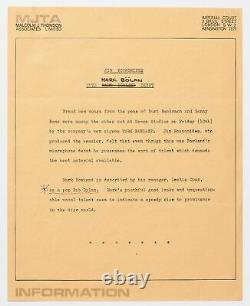 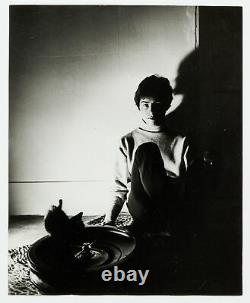 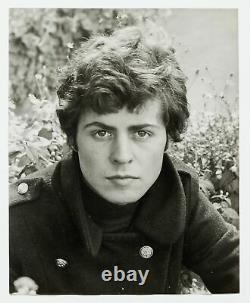 Collection of Letters, Photographs, and Poetry from 18-Year-Old Marc Bolan. Author: BOLAN, Marc Title: Collection of Letters, Photographs, and Poetry from 18-Year-Old Marc Bolan Publication: 1965. An archive of items from the earliest part of the career of legendary British rock star Marc Bolan of T-Rex fame when he was only 18 and about to release his debut single on Decca Records in 1965. Included are two copies of the typed lyrics for his first single, "The Wizard"; two Autograph Notes Signed; five pages of typed poems stapled into a booklet; six 8" x 10" photographs taken by Fiona Adam, two of which show Bolan during his first recording session with producer Jim Economides; and a program for a Tyrannosaurus Rex tour two years later. All fine except for a small tear on the last page of the stapled poetry, a tack hole in one photo, and a couple annotations in red ink in the tour book.

The collection comes from the archive of London Sunday Times music critic Derek Jewell, who while writing an article about Economides, was made aware of a young musician he was working with. A publicity letter dated 10 September 1965 sent to Jewell mentions Bolan and explains, You will be hearing more from me concerning this boy, whom I feel has an appeal beyond the normal pop market. The first ANS is written on a white sheet that reads in full: Derek thought you might like to see some poems.

See you soon, sincerely Marc Bölan. Words to the wizard on green paper. " The second ANS is on a blue sheet: "Derek hope you like the pictures. First two are of the recording session. See you soon [arrow pointing down] Marc Bölan.

" Both signatures use the umlaut over the "o" in his last name, which was a new pseudonym created just a month before (and that some speculate is a contraction of the words "Bob Dylan). As stated, the letters are accompanied by two green sheets with the typed lyrics to "The Wizard" (here titled "The Wizard in the Wood"), along with a stapled packet of five sheets of poetry titled The Wizard, The Owl and The Big Black Cat. Both the lyrics and poems have been trimmed to the same size, likely by Bolan, who has signed both in type: Marc Bölan. Two of the six photographs show Bolan in the recording session, one up close with him concentrating on something out of sight, and the other in discussion with producers and engineers. The remaining images include two of Bolan sitting on a leopard rug by a miniature roulette wheel and holding a black cat, along with two outside shots of him dressed in a black pea coat.

Bolan looks surprisingly young in each with uncharacteristically short hair. Accompanying the letters and photographs is a press release for Bolan's first single with his name spelled "Mark Bowland" and corrected in black marker; a program for the Tyrannosaurus Rex tour "The Lion and the Unicorn" in the Oak Forests of Faun in 1969; as well as a file of press releases about Economides, along with the typescript of a profile of Bolan written by Jewell. An amazing archive capturing Marc Bolan at the start of his career as a solo performer, shortly before the creation of T-Rex made him a legend. Today we offer a wide ranging inventory, from Modern First Editions to General Used Books to Rare Archival Collections.

This listing was created by Bibliopolis. This item is in the category "Books & Magazines\Antiquarian & Collectible".

The seller is "betweenthecoversrarebooks" and is located in this country: US. This item can be shipped worldwide.