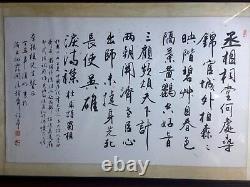 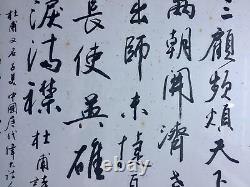 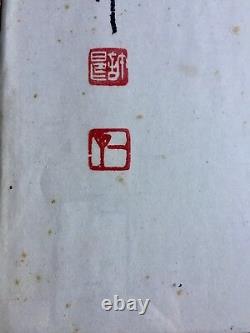 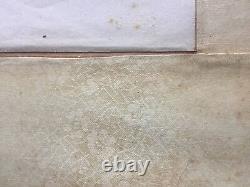 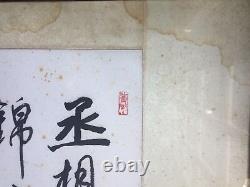 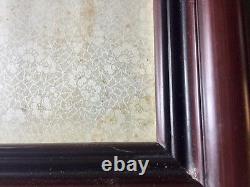 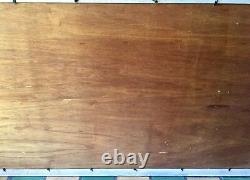 1950's - 60's Framed Calligraphy Poem relating to military general Zhu Ge Liang. Written by Xu Yang, Red Army General and Arts Member and advisor in Shangha. 23 ½ h x 29 w. 32 h x 55 w x 2d, Dark Mahogany colored wood frame, with Asian fabric motif matting. Framed under glass with wood board backer. Condition: foxing evident throughout the calligraphy, water damage to boarder area of the matting. Frames have wear, chips, corner wear, scratches. Lee, Importer, his neighbor was the artist. He lived in Shanghai for many years. About the work: The wide brush strokes , tells of Renowned Poem sung by Zhu Ge Liang, Military Advisor to Liu Bei who became the Emperor pf Shu Kingdom, one of the 3 Kingdoms of China Circa AD 220-280. Right before the third visit by Liu Bei to get advice on military affairs and organizational control at the cottage where Zhu abided for farming, Zhu sang this poem looking at the ceiling of the cottage right after his long nap, which whispers himself as a big potential to operate the world as his big dream. He didnt recognize that Liu Bei was listening to this song outside the cottage while waiting for his wake up. The thinner brush stroke technique recounts the poem of Doo Fu, famous Tang Dynasty poet, remembering in tribute Zhu Ge Liang, whose shrine he visited in his old age.

The poem refers to the 3 visits of Liu Bei and his son Liu Chan (Next emperor of Shu Kingdom). Doo Fu depicts the enormous talent and contribution performed by Zhu Ge Liang and at the same time lamented for his unfinished efforts of 3 Kingdom Unification due to his late age sickness.

The item "Calligraphy Painting Art Poem Xu Yang Mid Century Framed Doo Fu Zhu Ge Liang" is in sale since Wednesday, September 20, 2017. This item is in the category "Art\Paintings". The seller is "4636al" and is located in Saint Petersburg, Florida. This item can be shipped to United States.