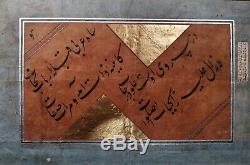 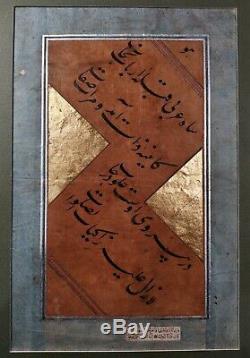 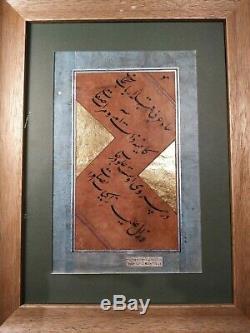 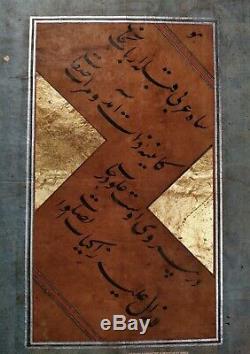 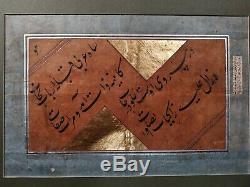 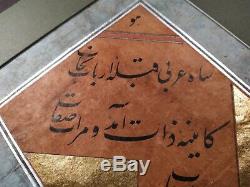 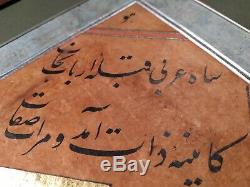 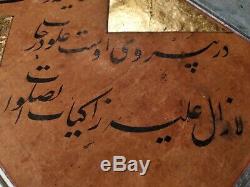 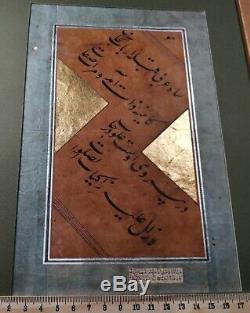 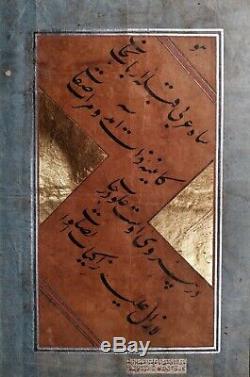 Antique Islamic Calligraphy Panel Handwritten masterfully in Nastaliq Script from 17th Century Safavid Persia. A Remarkable Persian Poetry of Abdul Rahman Jami inspired by Ibn Arabi Philosophy of "The Perfect Man". The doctrine of perfect man (Al-Insn al-Kmil) is popularly considered an honorific title attributed to The Prophet Muhammad having its origins in Islamic mysticism, although the concept's origin is controversial and disputed.

Taking an idea already common within Sufi culture, Ibn Arabi applied deep analysis and reflection on the concept of a perfect human and one's pursuit in fulfilling this goal. In developing his explanation of the perfect being, Ibn Arabi first discusses the issue of oneness through the metaphor of the mirror. In this philosophical metaphor, Ibn Arabi compares an object being reflected in countless mirrors to the relationship between God and his creatures.

God's essence is seen in the existent human being, as God is the object and human beings the mirrors. Meaning two things; that since humans are mere reflections of God there can be no distinction or separation between the two and, without God the creatures would be non-existent.

When an individual understands that there is no separation between human and God they begin on the path of ultimate oneness. The one who decides to walk in this oneness pursues the true reality and responds to God's longing to be known. The search within for this reality of oneness causes one to be reunited with God, as well as, improve self-consciousness. Here is the content of this beautiful Poetry Calligraphy Panel.

This outstanding poem is by Abdul Rahman Jami inspired by the views of one of the Greatest Theologian and Sufi Master, Mohi-al-din Ibn Arabi. This poem is from the book " Lawa'me & Lawa'ih".

Nr ad-Dn'Abd ar-Rahmn Jm (7 November 1414 9 November 1492, 9th Century Hijri), was a Persian poet who is known for his achievements as a prolific scholar and writer of mystical Sufi literature. He was primarily a prominent poet-theologian of the school of Ibn Arabi and a Khwjagn Sf, recognized for his eloquence and for his analysis of the metaphysics of mercy. His most famous poetic works are Haft Awrang, Tuhfat al-Ahrar, Layla wa -Majnun, Fatihat al-Shabab, Lawa'ih, Al-Durrah al-Fakhirah.

Jami belonged to the Naqshbandi Sufi order. This Calligraphy Panel is handwritten with beautiful Nastaliq Calligraphy Script on a handmade paper and Illuminated in Gold. The style of calligraphy, Quality and type of the paper and the ink is particular of 16th to 17th Century Safavid Dynasty, Persia. Text Panel Size : 23 x 15 CM. Full Board Size: 30 x 21 CM.

The item "Antique 17th Century Safavid Islamic Art Calligraphy Panel Persian Poetry Jami" is in sale since Saturday, March 7, 2020. This item is in the category "Antiques\Manuscripts". The seller is "antiquesroom" and is located in UMM AL QUWAIN.