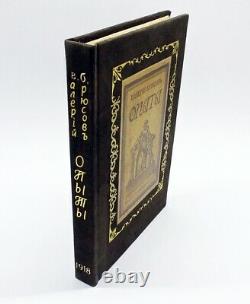 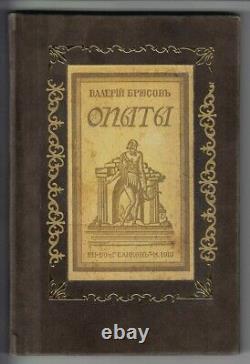 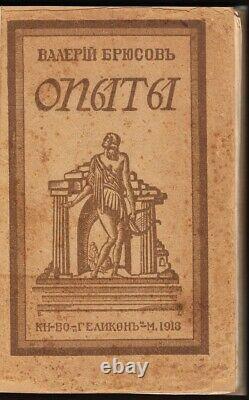 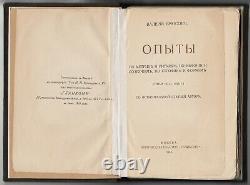 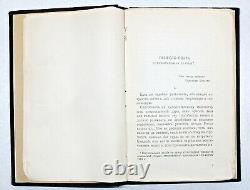 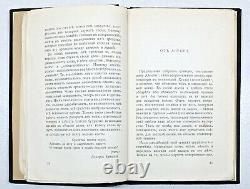 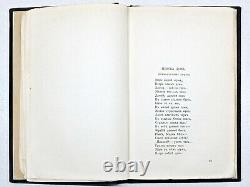 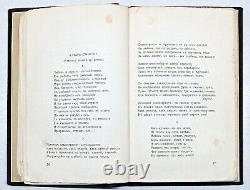 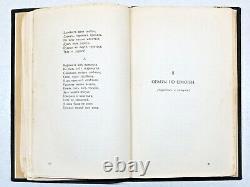 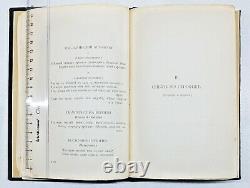 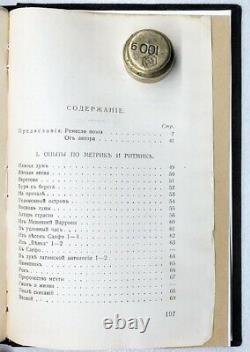 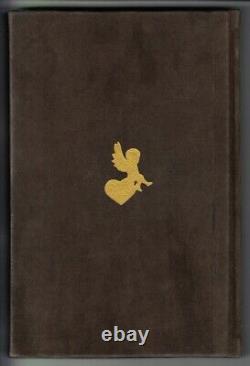 Vladimir Lenin Era 1924 - 1953 Printed Matter. The Russian Civil War Period 1917 - 1922 Period. Velvet in gold - binding, first edition, the founder of symbolism, strict impeccable "master" and magician creating poetry, priest of culture. Who influenced the creativity of a whole generation, master of words, jeweler of the style, art binding - decoration of the bookshelf. "Experiments on Metrics and Rhythm, on Euphony and Accords, on Stanza and Forms" (Poems 1912 - 1918) by Valery Bryusov.

With an introductory article by the author. Publishing house "Helikon", Moscow 1918. Printed in Moscow in the typography I.

Modern art suede owner's binding with gold embossing. On the spine, front and back covers of the cover with saving the publisher's paperback.

Please note that it is vintage book. Which printed 102 years ago, but not more late re-edition.

Fine condition, clean book, the block is not neatly glued into the binding. The original cover is glued to a cardboard, traces of time (see pictures). In 1918, Bryusov published a collection of Experiments... , which did not pose creative tasks and was specially devoted to the most diverse. Experiments in the field of verse extra-long line endings, figure poetry, etc.

The collection opens with the introductory article "The Poet's Craft". Which reproduces the lecture given by V. Bryusov on the course of poetic technique at the Moscow "Studio of Poetry" in April 1918. This is followed by his own experiments on the forms of versification distinguished by him. // , , , », 7- « ».

The "Vesy" headed by him. Became the most careful in the selection of material and an authoritative modernist magazine opposed to the eclectic and did not have. A clear program "Pass" and "Golden Fleece".

Bryusov influenced by advice and criticism on the work of very many younger poets. Almost all of them go through the stage of one or another "imitation of Bryusov". He enjoyed great prestige both among his peers. The Symbolists, and among literary youth, had a reputation as a strict, impeccable "master", creating the poetry of a "magician". A "priest" of culture, and among Acmeists (Nikolai Gumilyov, Zenkevich, Mandelstam), and futurists (Pasternak, Shershenevich and others).

Literary critic Mikhail Gasparov assesses the role of Bryusov in Russian modernist culture as the role of a defeated teacher of victorious pupils. Who influenced the creativity of an entire generation. In Bryusov's poems, the reader is faced with opposite principles: life-affirming - love, calls for the "conquest" of life by labor, for the struggle.

For existence, for creation - and pessimistic. Bryusov's moods are sometimes contradictory; they replace each other without transitions. In his poetry, Bryusov either strives for innovation. Then again goes back to the time-tested forms of the classics. Despite the desire for classical forms, Bryusov's work is still not Empire, but modern.

Which has absorbed contradictory qualities. In it we see a fusion of qualities that are difficult to combine.

According to the description of Andrei Bely. Valery Bryusov is a "poet of marble and bronze"; at the same time SA Vengerov considered Bryusov a poet of "solemnity predominantly". Kamenev, Bryusov is a hammer and jeweler. Valery Bryusov made a great contribution to the development of the form of verse, actively used inaccurate rhymes, "free verse" in the spirit of Verharne. Developed "long" meter 12-foot iambic with internal rhymes: Near the slow Nile, where Lake Merida is, in the kingdom fiery Ra // you loved me for.

A long time, like Osiris Isis, friend, queen and sister... ", the famous 7-foot trochee without a caesura in" Bled Horse ":" The street was like a storm. The crowds passed // As if they were pursued by an inevitable Rock... ", Used alternating lines of different meters the so-called" lowercase logaeda.

My lips are approaching // To your lips... In the 1920s, Bryusov taught versification at various institutes, some of his courses were published. USSR more usual methods accepted in Russia area. Payments must be done withing 8 days. If you won more that ONE lot.

And will be included into invoice presented. Please note that any addition personal instructions by packing, sending with printed invoice and etc. In case if the item simply dont justify your hopes. The item "1918 RUSSIA VALERY BRYUSOV Experiments in ART BINDING" is in sale since Saturday, August 29, 2020. This item is in the category "Books & Magazines\Antiquarian & Collectible". The seller is "juri_tallinn" and is located in Tallinn. This item can be shipped worldwide.