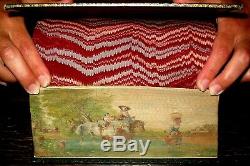 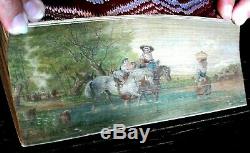 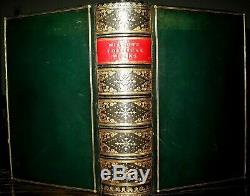 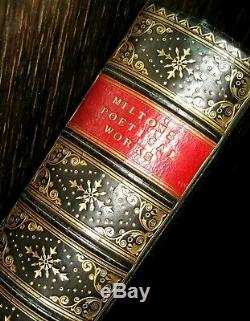 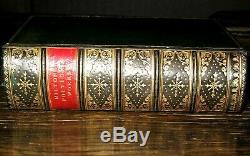 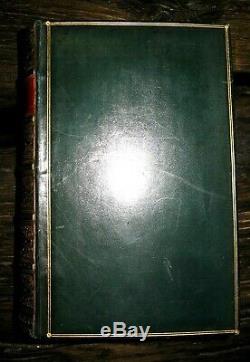 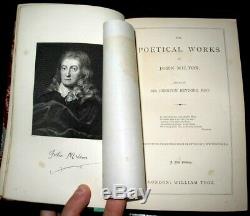 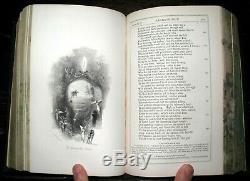 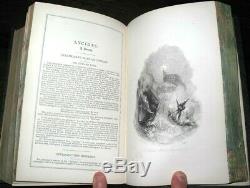 STUNNING FORE EDGE PAINTING AFTER OR BY? MILES BIRKET FOSTER; SIGNED FINE LEATHER BINDING. The POETICAL WORKS of John MILTON. Edited by Sir Egerton Brydges, Bart. Illustrated with Engravings from Drawings by J. London: William Tegg, ND c1845-50. Gorgeous finely bound collection of John Milton's best known poetical works, including of course, both Paradise Lost and Regained, with a hidden gem of a find lying quietly under the shimmering gilt page edges. Bound in deep green leather boards with gilt borders and turn ins, the spine enhanced with gilt ruled raised bands and gilt decor/ embellishments as well as a red and gilt leather title label, as shown. This is an extra special gem, as it contains a strikingly beautiful and hidden (fanned) watercolor hand fore-edge painting of an English countryside scene after Myles Birket Foster's Returning From Market hidden beneath its gilt fore edges , as shown. Myles Birket Foster was a popular Victorian English illustrator, watercolor artist and engraver. He is known for his work for the Illustrated London News and for his illustrations of Longfellow's Evangeline. He is also well known for sentimentalized portraits of the English countryside, and these etchings date to comparatively early in his career. Given the date of the bookl the painting is certainly contemporary to his earlier works and is heavily reminiscent of his work, leaning towards the remote possibility that this could in fact be in his hand, if not from a pupil or follower with similar skillset! Covers with very light wear, if any at all; very well kept and with all pages present and intact. Gilt to all page edges; marbled pastedowns and endpapers with blind patterned border along inside edge. Handbound and binding signed by S & T Gilbert, stamp affixed inside upper gutter hinge. Portrait frontis of Milton with additional steel engravings throughout the text. Crisp, clean pages with a few small foxing marks and spots, and similar miniscule wear points.

Measures roughly 9" x 6" x 2.5. RARE, as with all fore-edge paintings, a truly UNIQUE item with great associations! This is a museum quality volume.

From Wikipedia, the free encyclopedia. An Heroic Poem , translated from the Italian of Torquato Tasso.

There are two basic forms, including paintings on edges that have been fanned and edges that are closed; thus with the first instance a book edge must be fanned to see the painting and in the second the painting is on the closed edge itself and thus should not be fanned. A fanned painting is one that is not visible when the book is closed. In order to view the painting, the leaves. Of the book must be fanned, exposing the edges of the pages and thereby the painting. Another basic difference is that a painting on the closed edge is painted directly on the surface of the book edge (the fore-edge being the opposite of the spine side).

For the fanned painting the watercolor is applied to the top or bottom margin (recto or verso) of the page/leaf and not to the actual "fore"-edge itself. A single fore-edge painting includes a painting on only one side of the book page edges.

Is applied by the bookbinder. After the painting has dried, so as to make the painting completely invisible when the book is closed and the pages are not fanned.

These are sometimes called a'triple edge painting'. A split double painting has two different illustrations, one on either side of the center of the book. When the book is laid open in the center, one illustration is seen on the edges of the first half of the book, and another illustration is on the edge of the second half of the book. There are even examples of rare variations that require the pages of the book to be pinched or tented in a certain way to see the image. The earliest fore-edge paintings date possibly as far back as the 10th century; these earliest paintings were symbolic designs.

Fore-edge paintings, believed to date to the 14th century, presented heraldic. Designs in gold and other colors. The first known example of a disappearing fore-edge painting (where the painting is not visible when the book is closed) dates from 1649. The earliest signed and dated fore-edge painting dates to 1653: a family coat of arms painted on a 1651 Bible.

There is an interesting legend of how hidden fore-edge painting on books supposedly first began: Charles II of England had a lady friend, a duchess, who often borrowed his books, sometimes forgetting to return them. As the story goes, the king commissioned the court painter, Sir Peter Lely. And the court bookbinder, Samuel Mearne. To devise a secret method in which his books could be identified. Between the two they worked out a unique plan.

Some weeks later, when the king was visiting the duchess he spotted a familiar looking book on a shelf. Taking it down he said, Ill just take my book along with me. But sire, the lady protested, that book is mine. The king raised his brows. Then, with a sly smile, he fanned out the book and revealed what had been painted on the inner edges--the royal coat of arms. The gilding on the outer edges had completely hidden the identification. Acknowledging that Charles had outwitted her, the duchess sank in a deep curtsy before her king. Around 1750, the subject matter of fore-edge paintings changed from simply decorative or heraldic designs to landscapes.

And religious scenes, usually painted in full color. Modern fore-edge painted scenes have a lot more variation as they can depict numerous subjects not found on earlier specimens.

The technique was popularized in the 18th century by John Brindley (1732 - 1756). Publisher and bookbinder to the prince of Wales.

And Edwards of Halifax, a distinguished family of bookbinders and booksellers. The majority of extant examples of fore-edge painting date to the late 19th and early 20th centuries on reproductions of books originally published in the early 19th century. No comprehensive census of fore-edge paintings in the United States has yet been completed. College of William and Mary.

Johns Seminary, Camarillo, California, is described as "roughly twice as large" as the collection at the Boston Public Library. S Center for Southwest Research & Special Collections holds 102 fore-edge paintings from the collection of Lucia von Borosini Batten of Albuquerque. Many were formerly owned by Estelle Doheny, who married her husband, oil baron Edward L. In New Mexico Territory in 1900.

Mudd Library at Lawrence University. Has a varied collection of books with fore-edge art that were donated by two alumnae, Dorothy Ross Pain Lawrence class of 1918, and Bernice Davis Fligman Milwaukee-Downer class of 1922. Has in their collection a few fore-edge books, some of which are Les Psaumes de David and Outlines from the Figures and Compositions upon the Greek, Roman and Etruscan Vases of the Late Sir William Hamilton. Fore-edge painting of the Tower of London. In Baltimore, Maryland also contains a collection of books with fore-edge paintings within its Dorothy McIlvain Scott Collection.

Surrounded by houses and an meadow with walking people, 1786 B 24. Images from the Dorothy McIlvain Scott Collection at George Peabody Library. The New Casket (1850) by Joseph Martin Kronheim. Sports and Pastimes of the People of England Joseph Strutt. English illustrator, watercolour artist and engraver (18251899). Myles Birket Foster by Elliott & Fry. The Old Watermill (unknown date; before 1899).

Foster was born in North Shields. England of a primarily Quaker family, but his family moved south to London in 1830, where his father founded M. Foster & sons a successful beer-bottling company. He was schooled at Hitchin. And on leaving initially went into his father's business.

However, noticing his talent for art, his father secured an apprenticeship with the wood-engraver, Ebenezer Landells. Where he worked on illustrations for Punch.

He also found work as a book illustrator and, during the 1850s, trained himself to paint in watercolours. And books of poetry by other contemporaries were a great success.

Birket Foster travelled widely, painting the countryside around Scotland. In 1863 he moved to Witley. Where he had an elaborate Tudor-style.

Being friendly with Edward Burne-Jones. He had the house decorated and furnished in contemporary style, with tiles and paintings by Burne-Jones and Morris' firm, Morris and Company. The same year he published a volume of "English Landscapes, " with text by Tom Taylor. Among his artist friends and associates were Fred Walker. Although he had painted great numbers of landscape scenes from Scotland. It was after moving to Witley that Birket Foster produced the works for which he is best knowna sentimentalised view of the contemporary English countryside, particularly in the west Surrey area. Although criticised for their idealised view of rural life, they were recognised for their detail and execution. Birket Foster's work (along with that of other artists) was used by Cadburys. He became ill in 1893 and moved to Weybridge.

He continued painting, but died on 27 March 1899. His obituary in The Times. Referred to him as "certainly the most popular water-colour artist of our time". He is buried at All Saints' Church in Witley. When his father, Myles Birket Foster died, the artist son's obituary was published.

In 1864, he married Francis Watson, the daughter of Dawson Watson, and sister of the artist John Dawson Watson. Their eldest son, Myles Birket Foster (18511922), was an organist who composed cantatas for children's voices and wrote a History of the Philharmonic Society , 1913.

The seller is "mantosilver" and is located in Spencerport, New York. This item can be shipped worldwide.