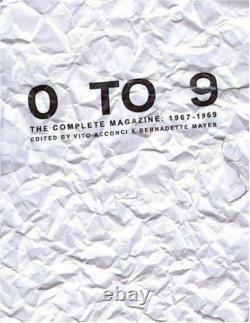 This is a rare copy of the Complete 0-9 magazine, published in 2006 and now Out of Print. This copy is in like new condition.

Published from 1967 to 1969 in seven limited mimeographed editions, "0 to 9" was edited by artist Vito Acconci and poet Bernadette Mayer. Seeking to explore the relationship between language and the page, Mayer and Acconci brought together the pioneers of 1960s experimental poetry and conceptual art. Sol LeWitt, Adrian Piper, Dan Graham, Ted Berrigan, Clark Coolidge, Robert Barry, Les Levine, Robert Smithson, Hannah Weiner, Emmett Williams, Dick Higgins, Yvonne Rainer, Aram Saroyan, Bernar Venet, Alan Sondheim and the editors themselves are but a few of the artists and writers who appeared in 0 to 9. "When considered as a whole, the chronological development of "0 to 9 provides a key understanding to, and perhaps the only exhaustive investigation of, the interstices between the concept-driven poetry of the late 60s and the pioneering formation of conceptual art. "0 to 9" was the first to publish the works of Dan Graham and Adrian Piper, as well as Sol LeWitt's "Sentences on Conceptual Art" and Jackson Mac Low's first poem series governed by chance operations, the Biblical Poems.